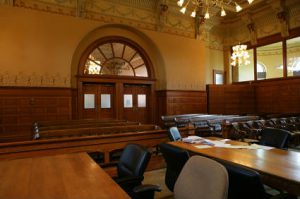 Within 10 days (unless waived) of the defendant’s Arraignment Hearing, a San Diego Magistrate is required to hold an Evidentiary Hearing to determine whether there is enough evidence to show that the defendant “probably” or “likely” committed a felony. This hearing is called the Preliminary Examination or simply “prelim.”  We refer to it as a “mini-trial”.

This hearing is also referred to as “probable cause hearing“, “judge check” or “preliminary exam.”  It’s a review made by a judge to ensure that the police and government have enough evidence to force the defendant’s innocence to be tried.  It’s also an opportunity for both sides to examine the strength of the evidence.

Preliminary hearings involve testimony from police officers, victims and witnesses.  Both the government and the defense team can present evidence but typically only the government’s attorney does.

The purpose of the preliminary hearing is “to establish whether there exists probable cause to believe that the defendant has committed a felony.”  This procedure is not performed when an individual is charged with a Misdemeanor Offense, nor is it available when a Felony Indictment has issued by a California Grand Jury.

Under California Criminal Law a defendant has a right to a Preliminary Hearing within 10 days of his/her Arraignment.  This right can and is often waived to complete a full investigation.

The actual hearing is typically less than a few hours, but can go on for a few days.  Judges must complete them within the “one-session rule”. This means they can’t attend to other hearings or cases as the preliminary hearing takes precedence.

One of the first things you’ll notice is that evidence that would otherwise be excluded at trial or other evidentiary hearings is allowed at a preliminary hearing.  In 1990, California Residents enacted Proposition 115.  This law specifically allows evidence, that would otherwise be inadmissible, to be admitted if a POST Certified Officer is testifying. For example, police officers (assuming they meet strict standards) are allowed to testify to “hearsay”.

Additionally, the standard of proof required is only “probably” or “likely” that the defendant committed the crime.  The higher standard of “proof beyond a reasonable doubt” only applies in Trial Proceedings.

Even though the government is typically the only party presenting evidence that doesn’t mean the defense can’t put on evidence.  The full power of the court of subpoenaing witnesses and cross-examining them is available.

The defendant has the right to be represented by an attorney at the Preliminary Examination.

Although a Preliminary Exam and Trial are both evidentiary hearings there are significant differences between the two, including:

What if Only Misdemeanor Offense Show? A prelim is only to be held on felony charges. Sometimes felony charges will be brought but when the evidence shakes out its moved back to misdemeanor county.

A preliminary exam is one opportunity to dismiss baseless charges at an early stage and prevent the embarrassment and expense of going through trial. Our attorneys perform preliminary hearings as part of our felony “pre-preliminary” services.  Our services include investigating witnesses, reviewing discovery and preparing to advance your position.