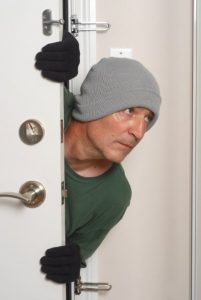 California law defines Burglary under Penal Code § 459 as entering a structure (eg room, store, apartment, etc) with the intent to commit theft (petty theft included) or any felony (eg battery, assault, etc).  It’s the act of “breaking” a barrier with the intention of committing a crime that creates criminal liability.

California Penal Code Sections 459, 460 and 461 describe burglary, its degrees and applicable punishments. Burglary can be a misdemeanor but is more often charged as a felony with a possibility of 84 months in California State Prison for the most egregious offenses.

What Must the Government Prove?

Fundamentally, in order to be found guilty of burglary, the district attorney must prove the following:

The final element, “intent to commit …” makes burglary a specific intent crime and is most often proved by circumstantial evidence that the defendant intended to commit another act besides just entering the structure.  Possessing tools like pliers, security device keys, or screwdrivers will be used to circumstantially prove the intent to commit burglary and will likely be an added charge of Misdemeanor Possession of Burglarious Tools under Penal Code § 466.

Additionally, many individuals are charged with burglary even without intending to steal anything because the last element opens the intent up to “any other felony.”

California law distinguishes two degrees of burglary: first degree and second degree. The most serious offense, first degree, is a felony.  Second degree burglary is a “wobbler” and can be charged as either a felony or misdemeanor offense depending on the circumstances and the defendant’s criminal record.

Penalties For a Burglary Conviction

Additionally, a conviction of First Degree Burglary is a strike on your criminal record.

A Burglary Charge can have serious consequences.  Hiring the right attorney may be the difference between a conviction and a dismissal.  Take back the Upper Hand.  Our defense attorneys are the best in the business:

If you have been charged with Burglary under PC 459/460(a) or PC 459/460(b), we offer a 100% free Consultation by calling 619-452-2539 or emailing us at attorneys@hullingerfirm.com.  Talk to one of our experienced Burglary Defense Attorneys today and take back the upper hand.